Ghanaian musician and Menpe Hitmaker Amerado is finally out with his much anticipated new single ‘Twa So’ featuring Fameye.

The song ‘Twa So’ which literally translates as ‘ceasefire’ or ‘back off’ tend to expose backbiters and friends who carry bad energy.

This afrobeat song according to the musician is his first major single in 2020 after his return from the UK to meet the COVID-19 crisis.

Even though he has been dropping some freestyles and singles, he described that as a way of entertaining his fans amidst the pandemic.

Twa So was produced by TwoBars, mixed and mastered by Liquid Beatz.

Listen to the song below here: 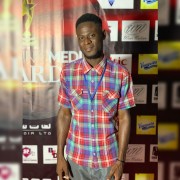